High-profile event focused on importance of individuals, having the right stuff

For the 12th consecutive year, Flowserve was title sponsor of the 2017 Dallas Cowboys Kickoff Luncheon, held August 30 at AT&T Stadium in Arlington, Texas. This event is an annual fundraiser for Happy Hill Farm. Founded in 1975, ‘The Farm’ is a residential school and leadership-development campus in Granbury, Texas, that has served as the home-away-from-home for children and youth with a variety of backgrounds and needs.

Brad Sham, the longtime radio play-by-play announcer for the Dallas Cowboys, emceed the event and opened with a moment of silence to remember those suffering the damage and flooding caused by Hurricane Harvey. After students from the Happy Hill Farm choir sang the national anthem, Brad challenged the audience: “Look at these faces. These are people, not statistics, and the lives of some of them may have literally been saved by the opportunities they’ve received at Happy Hill Farm.”

Flowserve has long admired the non-profit’s mission – “to train and educate compassionate young adults and put them on the path to becoming future leaders with a desire to change their world for good” – and the impact the organization has made since 1975.

Brad then introduced Scott Rowe, Chief Executive Officer, who emphasized that Flowserve’s long-term support of this event is due in part to the alignment of the organizations’ values. “Happy Hill Farm provides a safe place for at-risk children,” said Scott, “they hold every child to a high standard of conduct and character, and they’re fostering future leaders with ethics and integrity – all of which align with Flowserve’s core values.”

Flowserve also views its ongoing sponsorship as an “investment in the future,” said Scott, “not only for the strong foundation the Farm provides these young people, but also for the impact they are having on our society as they go to college, vocational school, the military or to start a career.” He encouraged the audience to give generously for the next generation of leaders graduating from the Farm and its North Central Texas Academy (NCTA). “There’s no doubt that Happy Hill Farm changes lives.” To demonstrate his point, he introduced Casey Williford, the winner of Flowserve’s 2014 NCTA scholarship.

As 20-year-old Casey spoke to the more than 900 people assembled in the stadium, it was hard to imagine how she had escaped her past. It was remarkable that this high school valedictorian, who is now an accounting major in Texas Tech University’s honor college, could have grown up with parents who were in and out of jail. It defied the odds that this poised young woman who plans to become a Certified Public Accountant and run her own accounting firm had no place to call home as a child, having to move from place to place 26 times.

Jason Garrett, head coach of the Dallas Cowboys, spoke about the simple but powerful message delivered in “The Right Stuff,” the book and movie about the U.S. pilots and astronauts who tested rocket-powered aircrafts and prepared for space flight. He explained how Ed and Gloria Shipman, the founders of Happy Hill Farm, had ‘the right stuff’ when they opened their home in 1974 to two teenage girls who needed a place to stay. More importantly, said Jason, was how the Shipmans demonstrated the right stuff – day after day and year after year – to build what has become a safe place, a school and an environment that fosters future leaders.

Todd Shipman, President and Chief Financial Officer of Happy Hill Farm, later commented: “Flowserve is a company that really and truly helps us continue what my mom and dad started more than 40 years ago. Those early years had their challenges, but with ongoing support from businesses like Flowserve, sports franchises like the Dallas Cowboys, and caring individuals and families from across the North Texas community, we’ve been able to make Happy Hill Farm what it is today.”

With his closing remarks, Dallas Cowboys Owner and General Manager Jerry Jones asserted that while Happy Hill Farm is known for helping disadvantaged children and youth, it is also a place for young people with other challenges and needs. He shared that one of his family members graduated from the school last year. “Happy Hill Farm is special, and it’s for kids who have all-walks-of-life challenges.” By all accounts, Casey Williford has overcome numerous challenges, but there was one that she saved for the closing words of her speech. “Thanks to the Dallas Cowboys, Flowserve and all the other donors represented here,” she exclaimed, “I’m happy to say that I will graduate from college completely debt-free!”

Flowserve’s support of Happy Hill Farm goes beyond the annual kickoff. “Flowserve Days” and “Junior Achievement” events have allowed employees and their families to engage with students through games, activities and educational opportunities. During the holidays, the company’s employees have participated in gift drives for children living at the Farm. Flowserve has also provided funding support through its “Scoring for Kids” radio partnership with the Dallas Cowboys. 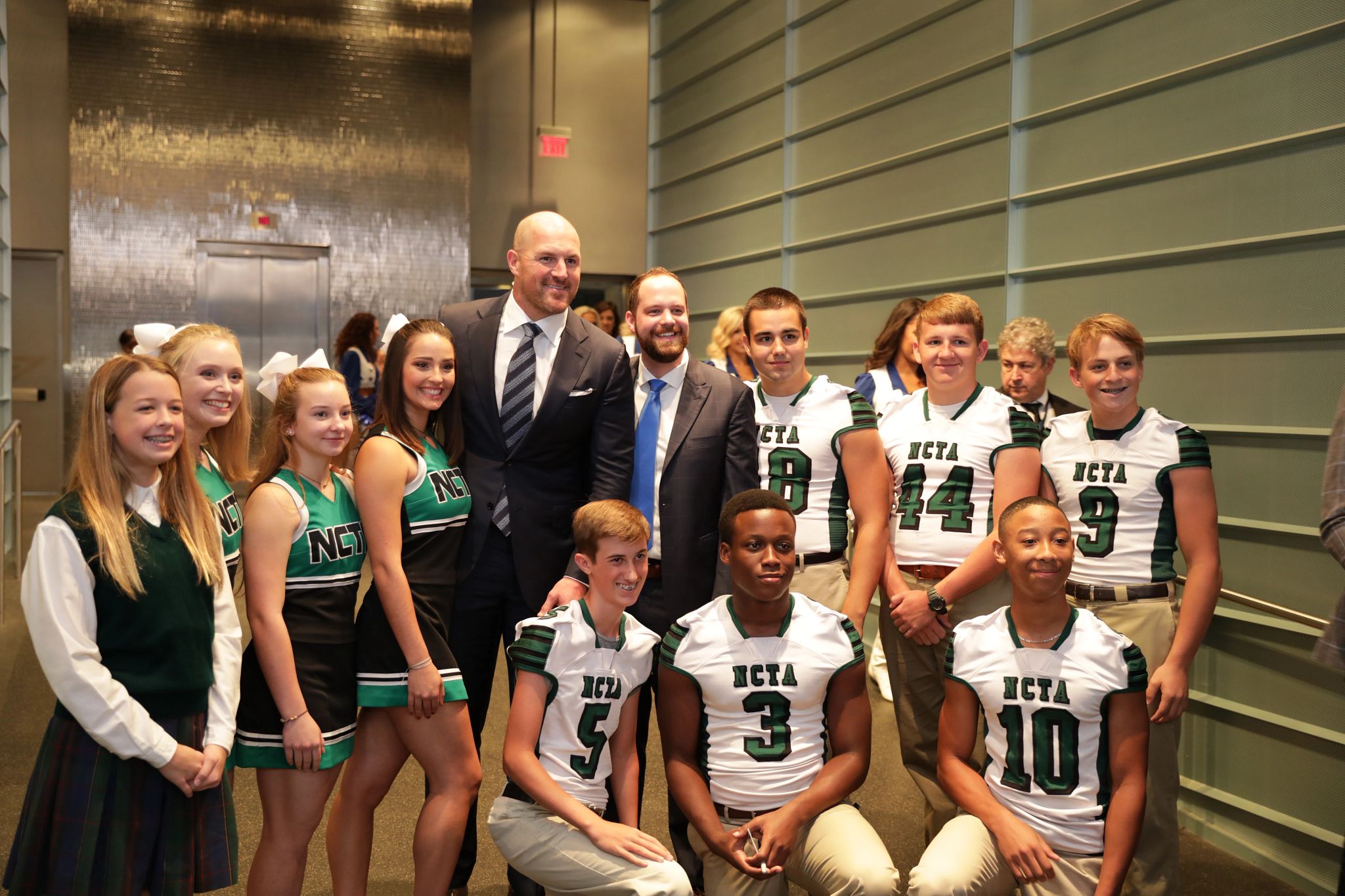 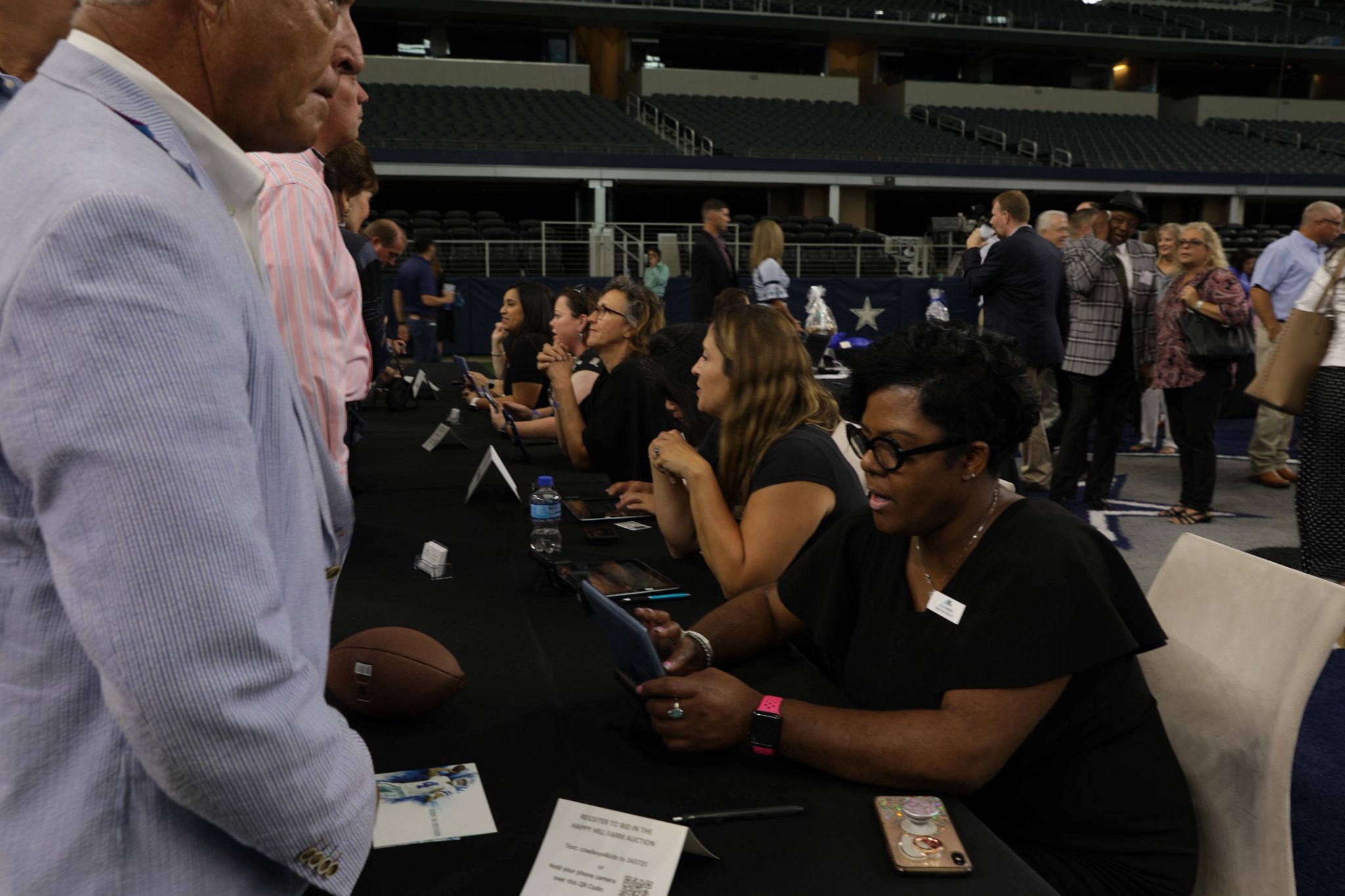 Flowserve volunteers are shown assisting with a silent auction that was part of this annual fundraising event.